After weeks and months of cold temperatures and possibly even snow stacked atop your lawn if your property is far enough north, the temperatures finally warm up, but then the wrath of winter is left behind. This usually means a layer of thatch (dead grass and other debris) that has built up at surface of your lawn. This thatch can restrict the flow of oxygen, fertilizer and nutrients eventually leading to impeding turf growth. Removing this thatch through the process of dethatching (also called power raking) is the best method to “open up” your lawn in the spring.

What Is The Difference Between Dethatching and Power Raking?

Power raking and dethatching are two completely different services and the difference between them often misunderstood. Both services offer a solution to similar problems, removing the thatch from your turf. Dethatching may sound like a general term for the process, whereas power raking sounds like a method to picking up leaves faster, both have specific meanings.

Some lawn care companies will interchangeably use the terms “dethatching” and “power raking” and if a customer asks for either one of the services, they generally will be provided a dethatching service. Most lawns require dethatching as opposed to a power raking service especially after a heavy snowpack sat on top of the lawn for several months.

Picking The Service That Is Right For Your Lawn

Here are a couple recommendations to ensure you and the company you have chosen to hire for dethatching or power raking are on the same page:

Ask Them About Their Process For Each Service

The process of dethatching a lawn is much different than power raking. If the company you are considering does not differentiate between each service, they most likely just provide one solution to removing thatch, and that is lawn dethatching.

Ask About Pricing For Lawn Dethatching vs. Power Raking

If their pricing is vastly different for each service, then the company offers both dethatching and power raking. Power raking generally costs double the price of lawn dethatching.

Dethatching a yard is less aggressive than power raking. It is the best option for a lawn that does not have a lot of thatch and looks rather bleak after being dormant for several weeks or months, especially underneath a heavy snowpack. Most lawns fall into this category. 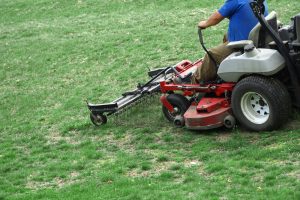 Dethatching a lawn with a mower-mounted dethatch rake.

For most dethatching services, it will involve a tine rake that is mounted to the front of a commercial grade mower, and an operator will drive your mower through all areas of your lawn at least once, sometimes twice before engaging the blades and bagging system (or lawn vacuum) and sucking up all the grass that was scraped up by the tine rake.

What Is Power Raking?

Power raking is an aggressive method to removing the thatch from your lawn. This involves a machine that appears similar to a push mower. 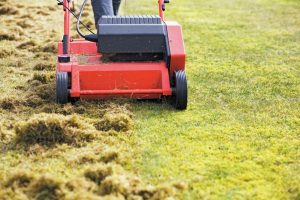 It employs mechanical flails to dig the thatch out from your turf. It will pick up 2-4x more thatch than dethatching. This service is reserved for lawns with a serious thatch problem.

Once all the thatch has been brought to the surface, the lawn area will be gone over with either a commercial grade mower equipped with a bagging system to pick up all the debris. This process is incredibly labor intensive and is the reason why it costs more than lawn dethatching.

Most service providers will equip a lawn mower with a thatching rake, also referred to as a tine rake, which a sharp tine rake that digs the thatch out of the lawn. A power raker is similar size to a push mower and uses flails to scrape away the thatch in your turf.

When Should You Power Rake or Dethatch Your Lawn?

The ideal time to power rake or dethatch your lawn is early spring, usually combined with a comprehensive spring clean up where accumulated leaves, sticks and other debris are removed from your landscaping beds and yard. Then quickly followed up with the first fertilizing application of the year.

Dethatching and power raking services can also be performed in the fall when temperatures begin to cool down.

Which Service Is Right For My Lawn?

At this point you are probably thinking, “This is great, I know the difference. But which service does my lawn need?”

If you have thatch that is smoothering out your lawn or preventing your grass from flourishing and becoming lush. If you mulch or discharge grass clippings back into your lawn when mowing, this increases the necessity for dethatching and power raking. Also, the thicker your lawn is as a result of proper fertilizing and watering, the more likely you will need dethatching or power raking each spring.

Power raking is a comprehensive option to solving problems with thatch in your yard, whereas dethatching is preventative maintenance for a lawn that does not necessarily have an issue with thatch, but is a great solution for a property owner who does not want to deal with thatch issues in the future. Similar to changing oil or filters on your car at proper intervals.

How Much Does It Cost To Dethatch A Lawn?

Like most lawn services, the prices and rates for dethatching are determined by a few factors. Beginning with the size of your lawn, many companies will base their lawn dethatching prices on the total square footage of your lawn area. Another key factor in determining pricing is the layout of your lawn and its accessibility for the contractor’s equipment.

The average price for lawn dethatching services is $100-$150 per man-hour. Many companies will also have minimum pricing for lawn dethatching of $75-$90. If your yard has intricate landscaping or lots of small areas that are hard to access with typical dethatching equipment, expect to pay a bit more for the service as it will take a contractor more time to complete the job.

How Much Does It Cost To Power Rake A Lawn?

For many companies, a power raking service will cost twice as much over the price of a dethatching service. A true power raking service using the proper equipment required in order to remove extremely thick thatch is very labor intensive to render the service and the clean up process afterwards.

Call (877) 728-8897 or Request A Quote to be connected with a company that provides lawn dethatching or power raking in your area!

Find A Lawn Dethatching Service Provider Near You